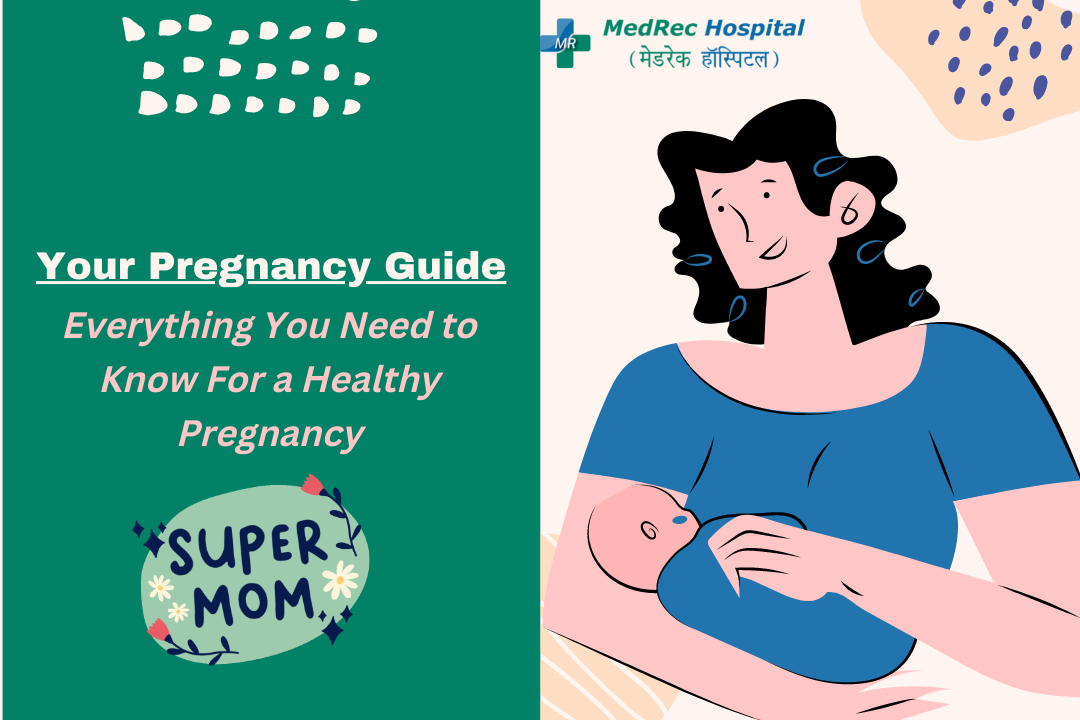 Your Pregnancy Guide : Everything You Need to Know For a Healthy Pregnancy

This is one of the most important & sensitive topics for every woman, and at the same time it’s worth celebrating as it’s a blessing for women & for some women it’s a dream to face and cherish this stage in their life.  When this blessing comes true of being pregnant then you are the most important person in the room, house or office, where your parents, husband, brother, colleagues, friends etc. starts to pour love on you with their advice on what you should do & what not to do? What to eat? What not to eat? Where to go? How to go? & so on & on & on. Especially, when it’s your first child, your husband, in-laws, parents shower blessing, suggestion’s, love, so many predictions begin of a boy or girl, where you feel that you are the princess right now. Everyone runs around you to pamper & protect you to have good health and a healthy child.

These are the words that every woman wants to hear once her married life starts to begin and she wants to be called a mother. This phase is a blessing in itself for every woman who takes the pride of getting a new life in this world. This is the most important & cherished part of women when giving life to unborn babies & parallelly she also gets a new life of motherhood for life long. Maternity is a very sensitive phase for every woman as she develops with a new life in her womb, she goes through emotional changes, hormonal imbalance changes, physical changes, mental stability changes, pain changes week by week, mood, taste, health, etc., & so many changes she has to go through to deliver a new life from her own self, which itself is a painful but pleasurable moment. During this, womens need to take care, precautions, prevention, avoid some habits & so on to come to the final stage of pregnancy to deliver a life with miles of uncountable pain.

On the other hand many women are not that lucky enough to get easily desirable wishes fulfilled, many women struggle to become pregnant and fulfill their dream as this is not only a woman’s dream but also a family is attached with a new life. Husband is involved who also craves to be a parent at some point in his life & this wish can be fulfilled only her wife once she becomes pregnant. This is one of the beautiful phases of everyone’s life to nurture a new life, where they also get once again their childhood back by being with their kids by becoming kids. So, now a days there are many ways of becoming parents but still every woman thinks of becoming biological mother rather than going through IVF Fertizaltion process until or unless she has she has gone through multiple miscarriages or due to pre health surgery or she has crossed peak age of preganancy has been finished due to fertilization issues.

Pregnancy is the time during which one or more offspring develops (gestates) inside a woman's womb. A multiple pregnancy involves more than one offspring, such as with twins. Pregnancy usually occurs by sexual intercourse, but can also occur through assisted reproductive technology procedures. A pregnancy may end in a live birth, a spontaneous miscarriage (spontaneous abortion), an induced abortion (induced miscarriage), or a stillbirth. Childbirth typically occurs around 40 weeks from the start of the last menstrual period (LMP), a span known as the gestational age. This is just over nine months. Counting by fertilization age, the length is about 38 weeks. Pregnancy is "the presence of an implanted human embryo or fetus in the uterus"; implantation occurs on average 8–9 days after fertilization. An embryo is a term for the developing offspring during the first seven weeks following implantation (i.e. ten weeks' gestational age), after which the term fetus is used until birth. Signs and symptoms of early pregnancy may include missed periods, tender breasts, morning sickness (nausea and vomiting), hunger, and frequent urination. Pregnancy may be confirmed with a pregnancy test. Methods of birth control—or, more accurately, contraception—are used to avoid pregnancy.

Pregnancy brings a lot of changes in women’s life and health. Some of the changes are normal and some are not. Most of you all might not know because it will be your first time. Some of you all know due to experience of this phase.

How to become pregnant?

Ovulation is the process where a mature egg is produced from the ovary. After it's produced, the egg moves down the fallopian tube and stays there for 12 to 24 hours, where fertilization takes place..

Nowadays you are getting Ovulation prediction kits that help you to predict the best time to get pregnant. It predicts that you are ovulating. Or if you are having infrequent intercourse, it suggests mentioning when you can get pregnant. After having intercourse, the egg begins to travel down the fallopian tube. If a man and woman have recently had sex, the egg might be fertilized here by the man’s sperm. Uterus lining becomes thick enough for the fertilized egg to be implanted. If the egg is not fertilized, it will flow out of the body during the woman’s monthly cycle along with the lining of the uterus, which is also shed. The egg is so small that it cannot be seen.

The first day of your menstrual period is considered as day one.

"Start testing on day nine and keep going until you get a positive,

Women usually have a 28-day cycle and tend to ovulate on the 14th day.

But since everyone’s body is different, some women may have longer or shorter cycles, so check as per cycles.

What if you've been using birth control?

You can stop the usage of birth control as if you want to conceive or want to become pregnant. Remember that you could get pregnant before you get your period, so track ovulation may be difficult, and it might be harder to figure out your due date.

For this reason, "some people may feel better waiting until they get one period on their own," experts say.

Positions myths for getting pregnant - It’s a natural process where positions don't work out. Since, the process is explained as conceiving or willing to become pregnant if that process takes place naturally & properly then there are high chances of getting pregnant quickly.
Stay in bed right after intercourse - "It's good to relax in bed for 10 to 15 minutes after intercourse, just avoid going to the bathroom during this time as it may help the sperm that is going to get into the cervix will be in the cervix."
Do it frequently but not very regularly - In general, every other night around the time of ovulation helps increase your chance of getting pregnant, Sperm can live up to 5 days inside your body. The best thing is to have sex regularly, when you're ovulating, and when you're not. Once a day having sex is sufficient rather than having it multiple times a day.
Men should also take precautions - Tight-fitting clothing can negatively affect sperm count. So too can spending time in a hot tub or Jacuzzi. Constant & Non-stop cell phone habits may also affect men’s health. A research study says that men using a hands-free device with a cell phone and keeping their phone close to their testicles seem to have poorer sperm quality. To help them conceive soon, they also stay in good habits of food & healthy drinks by quitting or avoiding alcoholic drinks, smoking, drug addiction & etc. Same as with women expecting or trying hard to conceive to avoid smoking & drinking.

Your Pregnancy Guide : Everything You Need to Know For a Healthy Pregnancy

Pregnancy can be an exciting time. However, it is also a tim...

Kidney stones are tiny crystals that form in the kidneys and...